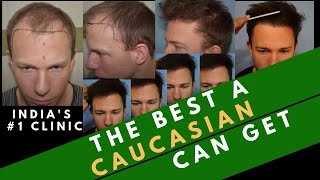 Please do not forget to SUBSCRIBE and press the Bell Icon so you
can continue to get updates when similar results re posted.

African hair is curly and looks dense and bushy. But it does not have the same density as other racial groups simply for the reason that one hair does the work of 10 hairs- the purpose of hair is to regulate body temperature and additionally, though less importantly, is a secondary sexual characteristic in humans.However, today man controls his environment so the he latter function weighs heavily on the minds of bald people today when they seek hair transplant.

Africans have curly hair for a reason. They are situated alongside the equator and the burning heat on a dark scalp is offset by a layer of thick curly gravity defying hair that forms an insulation of sorts by retaining relatively cooler air and preventing heat reaching the brain. The air is cooler here since evaporating sweat retained in hair zone causes cooling. You will never see an African full head of hair dripping sweat even in the warmest of climates unlike other races where the hair drips sweat.

We have noted that the further you go into the African continent, the hair becomes curlier and thicker. This is due to racial mixing over the ages in coastal regions. African hair is likely to have Caucasian characteristics in Morocco and Algeria, Arab characteristic in countries Egypt and Libya, Indian characteristic in Somalia, Ethiopia and Tanzania and a mix of all racial groups in South Africa.

CHALLENGES FOR AN FUE SURGEON

As all FUT is an Afrocentric patient’s nightmare, so is most afrotextured hair an FUE surgeon’s worst dream come true!

FUT causes wide visible scarring in most such patients since their hair do not fall one on another but rise upwards and so unable to camouflage well. Secondly, the scalp skin is tight, causing widening of the scar. Thirdly, the pale scar stands out prominently on dark skin. Lastly, African skin has a higher than normal chance of hypertrophic scarring/keloid formation.

Performing FUE procedures on African textured hair, therefore, carries a formidable (sometimes daunting) challenge for the FUE surgeon. It is due to-

Dr. Bhatti, a leading plastic surgeon in India is dedicated towards bringing hope to the lives of many through the innovative and advanced FUE hair transplant techniques.